On Sunday, April 25th, Tim and I took to the road at 9am for another baseball adventure:  our first trip to the Mets’ new home, Citi Field.  We live about two hours from Manhattan.  Tim is a huge fan of trains so we drove to the upper west side and parked at 84 & Amsterdam, where my friend, Davlynn, used to live.  From there, we walked over to Central Park West and down three blocks where we caught the A Train at to Times Square where we walked a bit underground and eventually caught the 7 Train to Shea…I mean, Citi Field.

Ahh, there is no finer way to see Queens than by elevated coach: 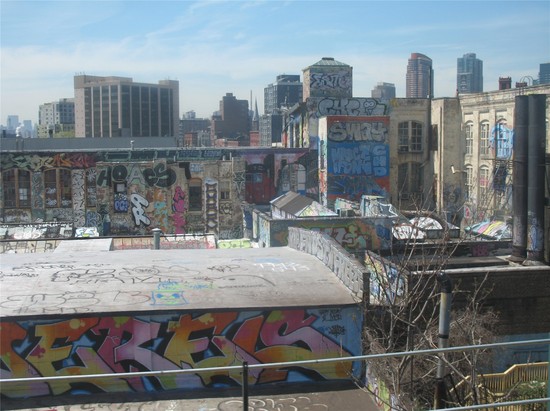 The view was decidedly better when we arrived at Willets Point and followed the well-marked route toward “Mets Baseball” (all three of these pictures are taken from the subway platform): 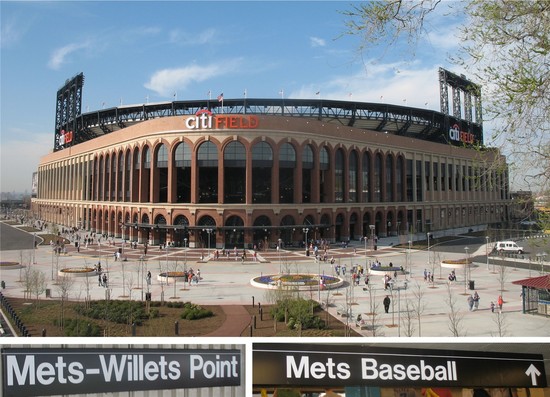 Without even asking, a nice guy offered to take our photo in front of the new stadium: 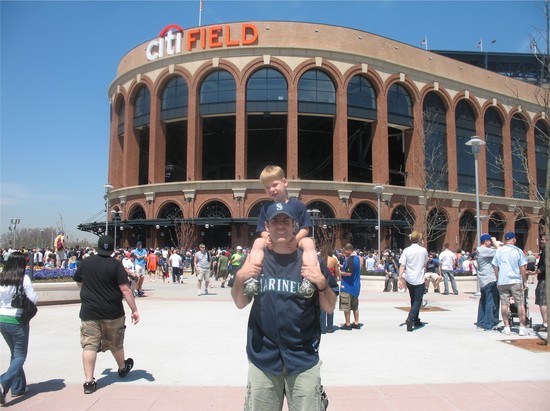 Next, we headed to an automated kiosk where our online purchased tickets were printed up and spit out at us.  It was time to enter the stadium.  So we headed to the Jackie Robinson Rotunda. 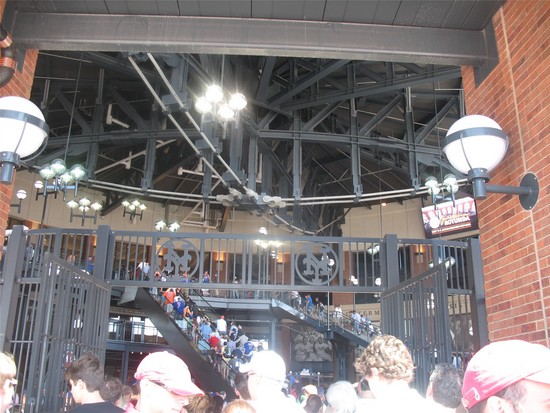 I have mixed thoughts on the Jackie Robinson Rotunda.  It is a nice looking, and quite grand, entrance.  There are interesting photos and nice quotes of Jackie Robinson on the walls.  And, he certainly is a man worth honoring.  It just seems a little odd to me that the Mets made the rotunda such a focal point of their new stadium when Jackie Robinson was neither a Met nor did he play for a team located in Queens.

Anyway, the Rotunda is nice and it gave us the opportunity for Tim to stand in Jackie’s bronzed footprints in the shadow of his retired number: 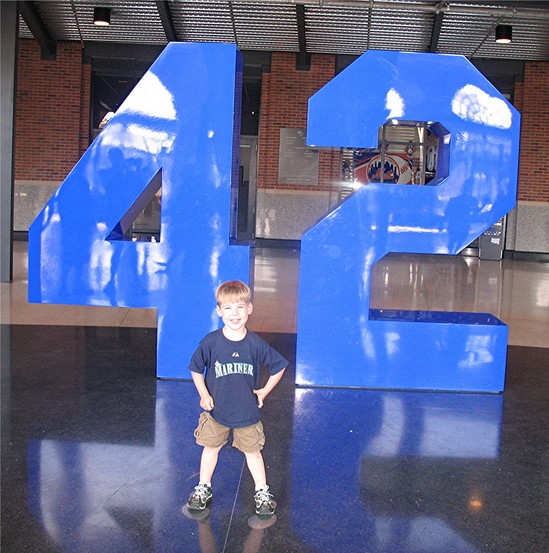 So it was time to check out the field.  Here is our first view of the field:

Shea Stadium, like most of the old stadiums, didn’t have a lot of unique features (or, well, at least intentionally unique features).  What it did have, however, was the famous home run apple, which reminds the spectators that they are in the big apple each time a Met player hit a home run (Note: in the 5-7 games I saw at Shea, I do not believe a Met ever hit a home run).   So, I wanted to check out the classic apple and its updated replacement.  The old apple is now resting in a somewhat unceremonious corner of a picnic-ish area behind the bullpen and under the main concourse (pictured below on the right).  The new apple is much larger and is in CF.  Interestingly, they ditched the top hat for the new apple:

Going to games with Tim, two things are very important to me:  (i) the snacks available at the park and the (ii) quality of the standing room areas.  In these two important areas, I give Citi Field a thumbs up and a thumbs down, respectively.  Check out this picture and then I will explain my thinking: 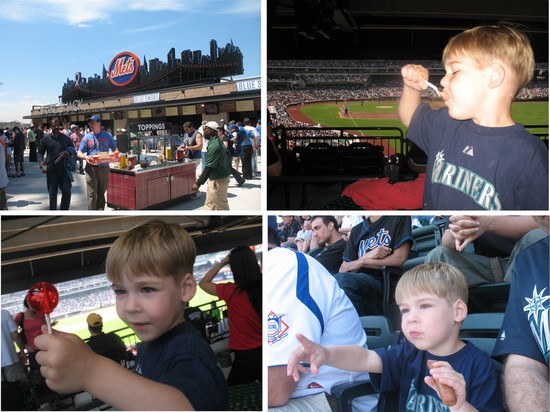 I will take them in reverse order.  My thumbs down for the standing room factor is really more a thumbs at a downward 45 degree angle.  Its not terrible.  In fact, there is a lot of standing room available.  However, I rank from the perspective of a father and 3-year-old son watching a game.  At Safeco Field and Citizens Bank Park (and I would assume others), there are standing room areas with counters looping the field.  They are great for Tim to sit on while he eats his ice cream helmet and I watch the game, and because there are no dividers people cram in and lot of people can have front row standing areas (for example, see my pictures from last weekend during the 8th and 9th innings of the Phillies come-from-behind win against the Padres).

At Citi Field, instead of counters they just have railings with drink holders spaced about 3 feet apart.  In the picture of Tim with his lollipop above, you can see a drink holder next to the lady-in-red’s hip.  Not kid friendly.  Also, Tim bashed his head on one of the rails while goofing around toward the end of the game.  Now, instead of counters throughout the stadium, some of the standing room area in RF has tall, wobbly green metal tables.  There aren’t many of them and they are set back behind the railing.  So, you are (at least) in the second row of standing room.  Plus, the wobbling is never good when you have a 3-year-old eating chocolate ice cream with sprinkles out of a helmet sitting on top of the structure.  Finally, because of the spacing of the cup holders, only one person stands every three feet and tons of prime front-row-standing room is squandered.  Poor design choice in my somewhat experienced Standing Room Only opinion.  This is all made even worse by the fact that security seeks out any kids sitting on their father’s shoulders (where Tim spends tons of time at every game) and makes the kids get down.  Therefore, at the standing room areas, there is virtually no way (other than on the few tall wobbly tables) for a 3 year old to see the game from most standing room areas.  Again, poor planning.

As for the food, prices were pretty much in line with other stadiums, unlike what I have heard about new Yankee Stadium.  I also found it interesting that the menu boards have the price and calories for all food items.  We had Nathan’s Famous hot dogs, which were good.  Tim had his usual ice cream helmet, and a lollipop from a little “Market” that is set back in the RF corner.  With respect to the helmet, the Mets should be commended for providing this classic ball park treat, with sprinkles and hot fudge no less (we passed on the hot fudge).  However, I was disappointed (and at the same time somewhat amused) that the Mets logo on Tim’s helmet was added on top of the “Shea Stadium 1964-2008″ logo.   Obviously, they are using left over helmets from last season with an amateur cosmetic f”ix”: 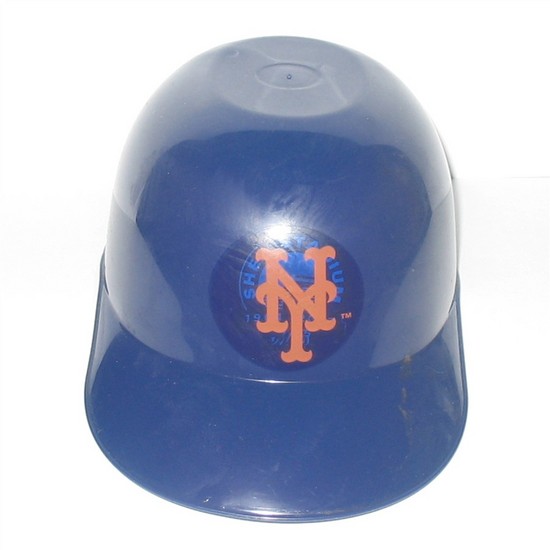 I’ll blame this on the Wilpon family losing money in the Madoff ponzi scheme and I’ll forgive them for it.  Again, it was somewhat amusing, so not all bad.

A couple more notes about the food picture above.  I understand from Zack Hample’s blog that the skyline above the CF food stands is from the top of the old scoreboard at Shea…I’ve just checked my own picts from last season, by golly, Zack is right (I’m not posting a picture, you’ll have to trust me…or Zack…on this one).

Speaking of the old scoreboard, here is the new scoreboard from front and back.  The “front” picture is taken from a bridge in the RCF area.  I’m not sure what the point of the bridge is.  It was crowded with standing room only people the whole game.  One feature that I really liked about the back of the scoreboard is that is had a smaller big screen in it.  So, when your kid(s) are playing back behind the scoreboard (where they have videos, two batting cages and a full whiffle-ball stadium complete with jumbo-tron screen), you can still see the game on the back-of-the-scoreboard screen (in this picture you can see that Omir Santos was batting in the bottom of the first):

As we usually do, we circled all around the inside of the stadium.  Here is a panoramic view from the third-base side:

We even decided to head up to our actual seats (for the first time in 3 games this season).  Here is the view from Section 526, Row 9, Seats 14-15, where we sat for one inning and ate our hot dogs:

See how the second level juts out straight up from the Mets on-deck circle?  It juts out like that on the 3B side as well.  All of the lower level seats between the “just” are sectioned off with rails.  I imagine that security is tight to get in there.  Plus, those people are the only people who can ever get a view from behind the plate at field level.  The concourse behind home plate is a tunnel set back from the stands.  Its dark and offers no view of the field whatsoever.  This was a terrible idea.  If during the game you want to walk from the 1B side of the stadium to the 3B side on the main level concourse, you’re gonna miss a minute or two of action while you walk the long  closed off concourse to the other side.

With the bad, of course, comes the good.  Note that in this picture you can see a large airplane coming in to land at LaGuardia, the airport is really close to the stadium.  At Shea, you could hear 747s flying over head all game long.  At Citi Field, I saw tons of airplanes coming in to land, but I didn’t hear a single one.  I’m not sure why that is.

Another plus about the stadium (from our perspective) was that you can see the 7 Train going back-and-forth from the 500 level (probably from below as well).  Tim loved that.  In fact, he is pointing to the 7 Train in the hot dog picture above.  Here is what he was pointing at: 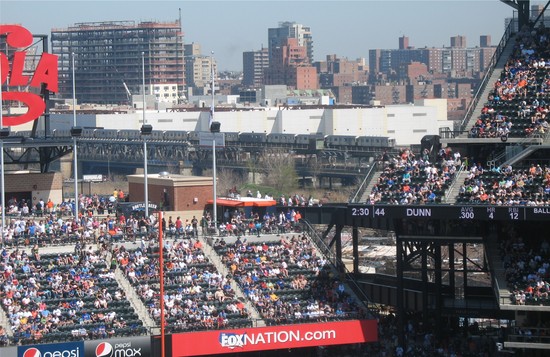 While in our assigned seats, I took this picture of Jose Reyes taking a pitch (a strike I believe) – the ball is right next to his front leg in this picture: 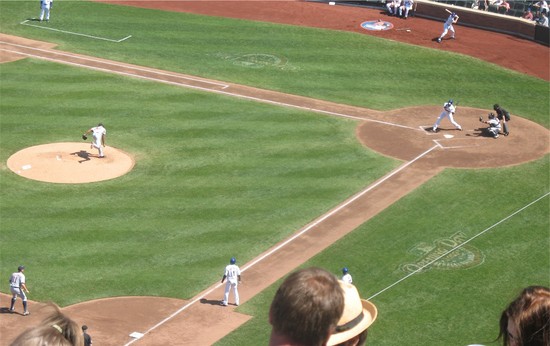 We then went down below and took a couple more pictures of batters while we circled the stadium again.  Here is Omir Santos about to pop this pitch up to 2B (the ball is circled in red): 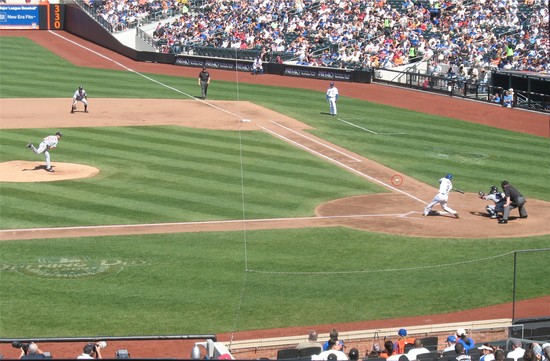 Here is former Mariner Jeremy Reed flying out to LF.  He has already hit the ball, which I have again circled in red: 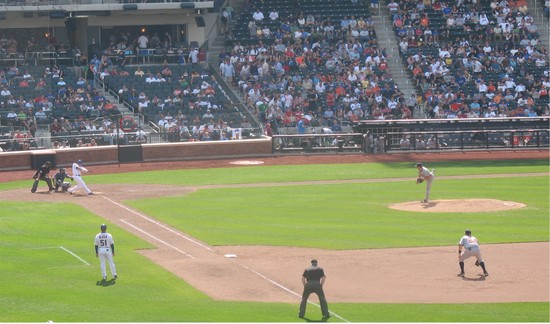 That concludes my game pictures.  Not that I cared really, but the Mets won 8-2.  Then, the real fun began.  It was kids run the bases day!  After waiting through a HUGE line outside the stadium, we snaked in by the bullpen: 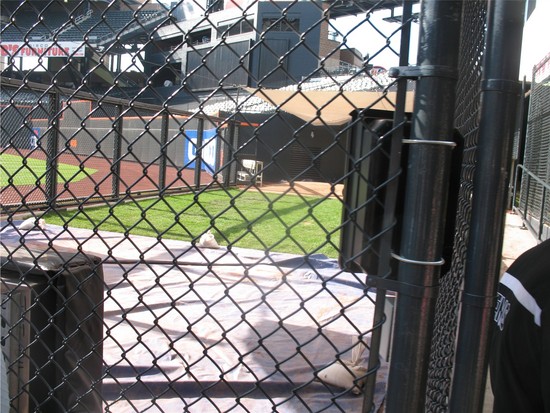 We were led onto the warning track in RF/CF: 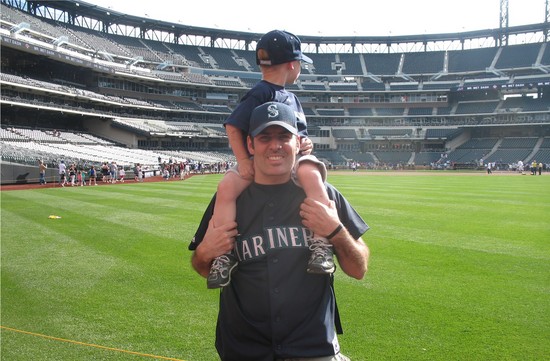 We duplicated our Progressive Field picture from last year down the RF foul line: 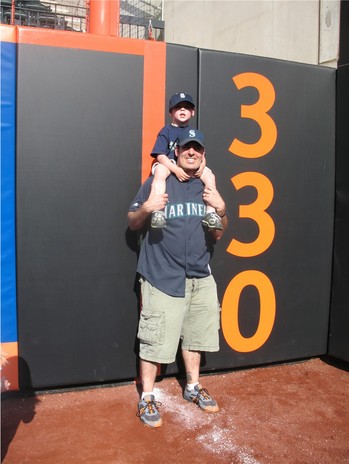 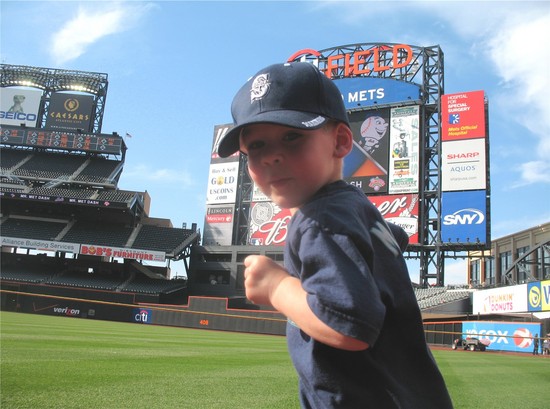 Then he stepped on first and bolted for second: 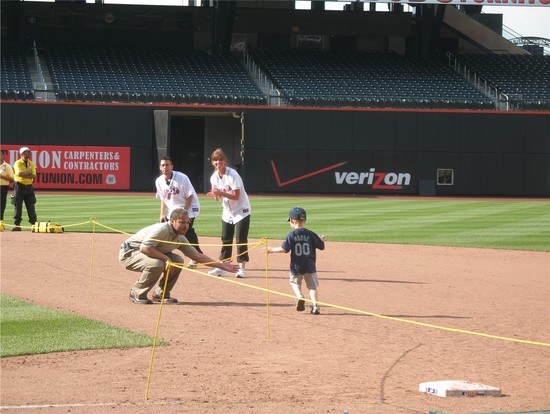 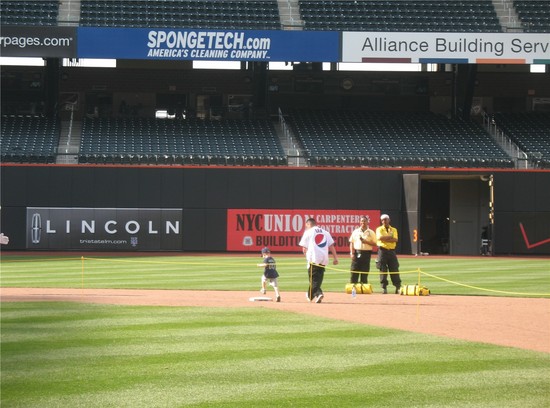 Touching second safely, he made the turn for third and then home.  He then decided he wanted to do it again (not allowed) and he dashed down the first base line and into the infield grass (not allowed) before this lady caught him: 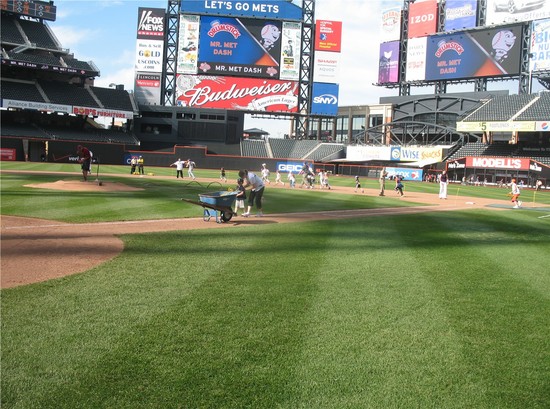 She escorted him to home plate, where he wanted to stay for a while: 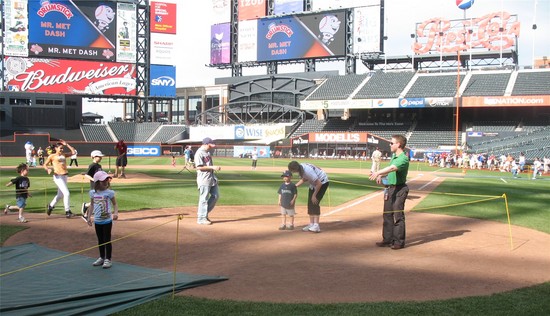 Eventually, I ran out and grabbed Tim (and touched home myself).  I then snapped this picture of us at the visitors’ dugout: 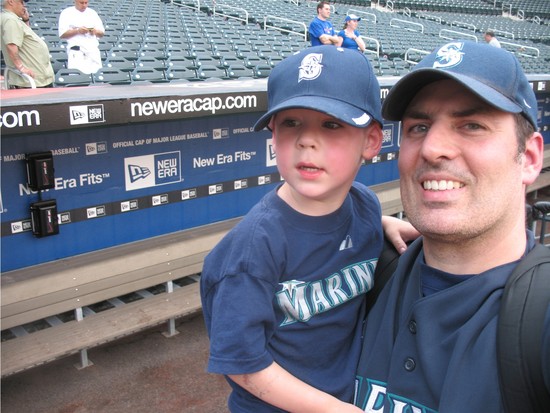 …and this additional picture showing the unique layout of the dugout.  Then he walked through underbelly of the stadium and headed outside down the leftfield line where I took one last picture of the exterior of the stadium because I wanted to capture this image of Darryl Strawberry in the Mets collage: 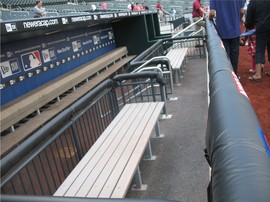 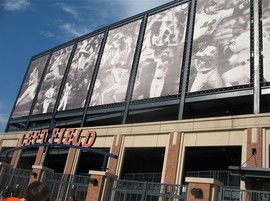 And then, another fine day of baseball and another fine stadium under our belts, we began the long, slow process of commuting home…and stopping for Ray’s pizza in Manhattan.