Living in Pennsylvania for the last 10 years, I don’t get many opportunities to see my old friends from school.  So I tried to get some of them together for a game on May 3rd.  It was also the first game my brother, Jason, had gone to with us since Tim’s first game on September 12, 2006.  Uncle Jason got to provide Tim his pre-game shoulder rides:

The plan was to sit in lower section in LF so one of us would catch Griffey’s home run when he hit it.  Unfortunately, for the second time in three games, Griff didn’t play.  😦  Nevertheless, the LF seats were great.  Highly recommended.  We were in Section 108.  Here is a view from section 109 (one section closer to the foul pole): 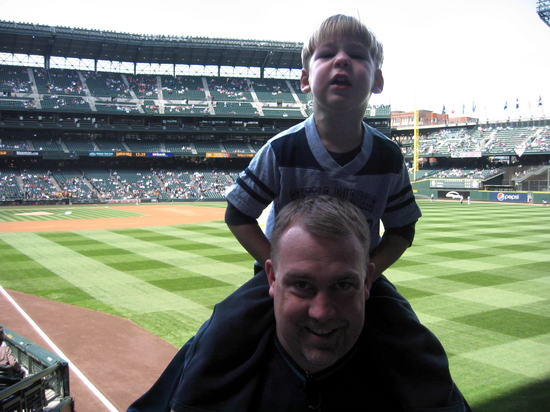 Here is our view of Ichiro:

Because we had a bunch of kids with us, Tim was quite content to stay in the seats for most of the game.  Here are some shots of our crew:

And here are a couple more friends picts:

Because we stayed in the seats the whole game, we didn’t do any exploring of the stadium.  But I did snap this one interesting picture on the way into the stadium.  This is a feature I’ve never seen in any other stadium:  the “nursing lounge.”

Raise your hand if you want to do some nursing with three other people and a nice view of the street outside of a baseball stadium!

Back to the game.  Here is Franklin Gutierrez tracking a ball for an easy out:

And here is Ichiro taking a high ball:

Here is a random picture:

See the “Seattle Childrens'” sign on the second deck?  And the guy standing in the middle of it?  And the next deck directly above him?  That is Suite #5 – the Ted Williams suite.  That is where we were for Tim’s first Mariners/MLB ever.  It was Tim’s and three other little kids’ first games so we celebrated it in style in the suite.  It was awesome!

This game was little leaguers’ day and they gave batting gloves to all of the kids.  Here is a shot of them:

They are actually really nice batting gloves.  However, they are not “kids” gloves…well, maybe little leaguer Danny Almonte…but not for a normal kid.  In fact, they fit me perfectly.  Here is a picture of some kids wearing them.  Notice Weston’s “thumb” sticking up a mile in front of Tim’s nose.  The gloves dwarfed the kids. 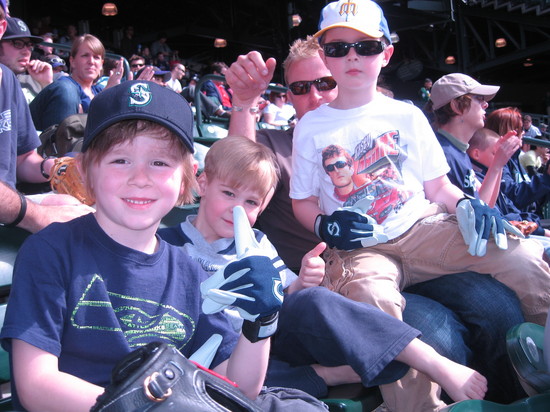 The weather forcast was dismal.  Scheduled to be another drizzly day like the night before.  But mother nature would not cooperate with the weathermen.  It was glorious.  Sunny with an occassional nice cool breeze.  It was so nice that Tim took his shirt off a bit and risked blinding the batters with his bright shining Irish-pale muscles: 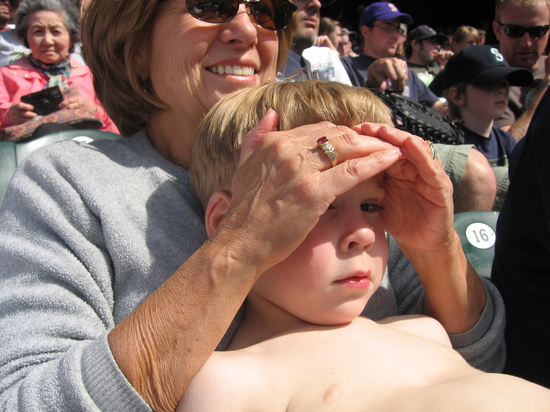 The game was excellent.  Kenji Johjima went yard in the bottom of the ninth to tie it up and send us into extra innings.  Here are Tim and Paul (or Paul’s hand) celebrating Joh’s HR with a high five:

…and the extra innings just kept a coming: 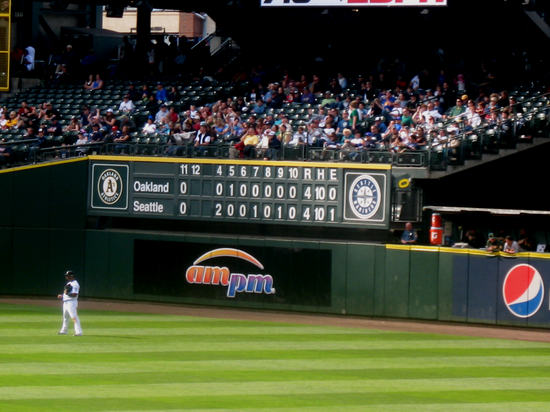 The M’s bullpen came through big.  They didn’t give up a run for 7 straight innings from the 6th to the 12th.  Unfortunately, Tim started to crash because he didn’t get his usual afternoon nap: 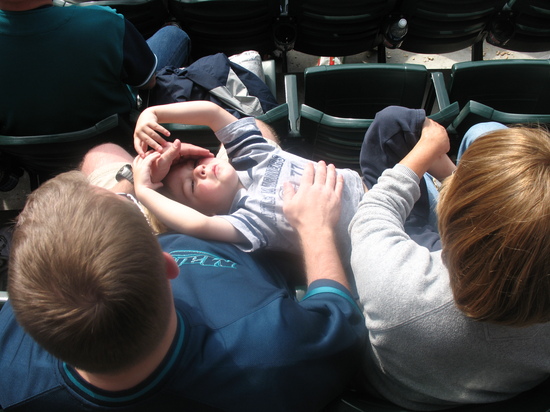 So, after the A’s scored three runs in the top of the 13th, Grandma made the executive decision that we needed to leave so her grandson could sleep in the car.  I reluctantly agreed.  Here is a picture from above the bullpen as we walked toward the exit. 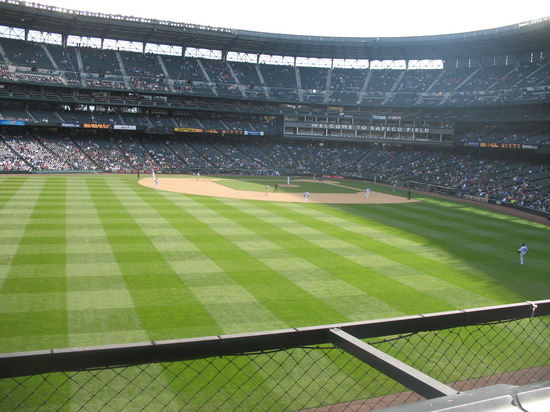 I ended up watching the beginning of the rally standing in the LF corner as my family all stood outside the stadium waiting.  Arrgh….I had to leave and we were coming back!  By the time we got to the car (parked in the old Kingdome north lot), the sausage vendors outside were reporting that the bases were loaded with only one out.  By the time we were two blocks from the lot, Tim was in a deep sleep, Ichiro’s hit tied the score and the M’s were heading to the 14th as we were heading home.  As we pulled into my folks’ house, I ran into the TV room just in time for Jose Lopez to step to the plate with the bases loaded and no outs: 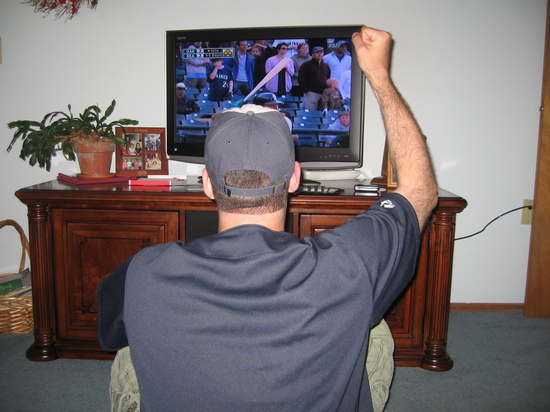 For the second time in the series, Lopez came up with a walk off single!  MARINERS WIN! 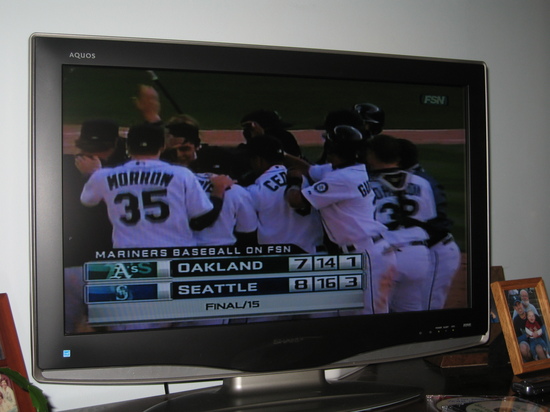 It wasn’t an ideal way to see the Mariners win, but it was better than my colleague who had to watch the Phillies (his team) win the World Series from a bar in San Francisco in a game 5 that he had attended two nights before.  Plus, I didn’t miss a Griffey home run.  So no harm, no foul.  A win is a win!