The roadtripping continued on the morning of Monday, August 18, 2008…

…we woke up at the KOA in Streetboro, Ohio, and made the 2 hour drive into Pittsburgh.  By around 11:00 a.m., we were hanging out with these guys outside PNC Park:

Tim and I had been to PNC Park before.  My dad had not.  This was my Dad’s first view of the inside of the stadium:

As you can tell, we entered the stadium from the CF entrance.  After snapping a photo of the field, we headed down to the RF corner and Tim played on the miniture whiffle ball field.  There was no BP and no one on the field so we had some time to explore the field.

After a few minutes playing in the kids area, we made our way down the 1B concourse and around to home plate.  As you can see (even with the second deck obstructing the skyline view), PNC Park is beautiful and has a spectacular view over the CF-RF stands.

…after getting a Grandfather-Father-Son picture behind the 3B dugout.

So, here we are behind the Pirates pitchers.  Our first thought was, “Who are these guys?”

They seemed like a nice bunch of guys.  But seriously, I didn’t know any of them.

After a minute or two, Tim and I jumped that railing and stood along the fence along the warning track.  Soon after that, someone threw a ball over our heads and directly to my dad.  I think it was Matt Capps.

A few seconds later, Matt Capps came over and started signing autographs.  My dad tossed his baseball down to us and we got Capps to sign it…

…and then we got our picture with him.  He was very nice.  And, for the record, I have since heard of the guy.  Maybe we’ll hear even more about him now that he’s left Pittsburgh.

A little bit later, Denny Bautista threw a ball to me and Tim…

…actually, he rolled it to us from approximately where he is shown on the field above.   It was clear that he was rolling it to us, and everyone else was cool about it.  No one tried to intercept it.

We ended up getting a couple autographs on that ball, and a picture with one of the autographers… 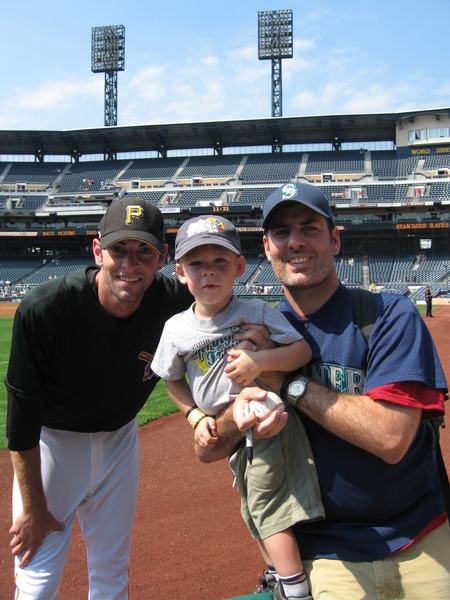 Here are the three autographs we got on that ball:

After getting our picture with Beam, we continued our stadium tour.  Next stop…

…Ralph Kiner’s hands.  This is in the LF concourse below the big spiral ramp up to the upper deck.

And speaking of that ramp, that was our next move… 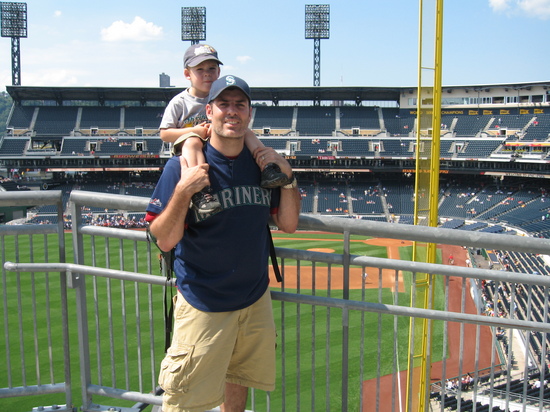 …and here are me and Tim at the top.  And here is a panaramic view of PNC Park from the top of the spiral ramp:

While hanging out at the top of the ramp, I noticed messages going by on the skinny screens between the field and second levels.  Then I saw a text message number, so I sent in a message to commemorate our trip: 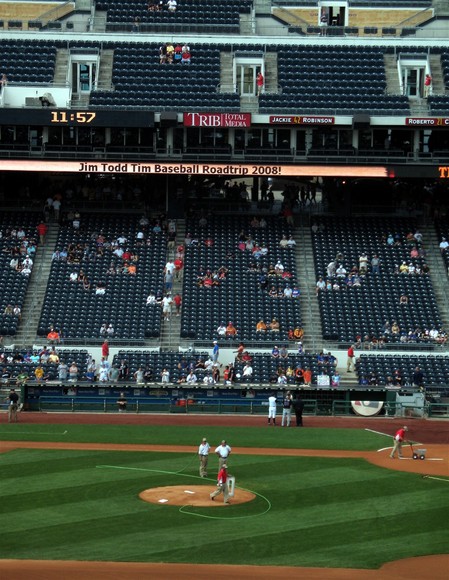 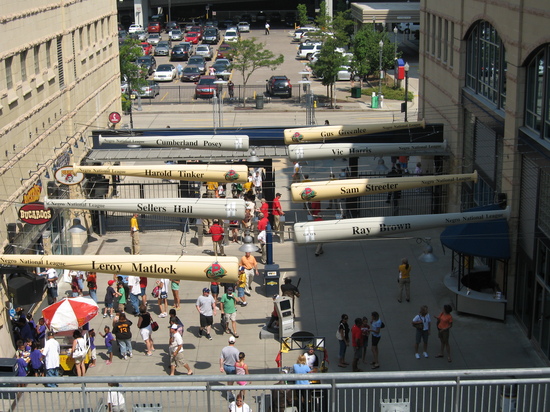 That is the LF/3B entrance.  I’m not sure if it has an official name.  But it honors various Negro League baseball players.  As you can see, the large bats hanging over head list:  Harold Tinker, Leroy Matlock, Gus Greenlee and Sam Streeter of the Pittsburgh Crawfords; and Cumberland Posey, Sellers Hall, Vic Harris and Ray Brown of the Homestead Grays.

In the middle of the walkway is a statue of the great slugger, Josh Gibson.  In 2007, I got a picture of Tim and the Gibson statue.

Back to the tour, we ended up in the upper deck down the RF line.  Check out how cool the area looks with those golden bridges.  Excellent. 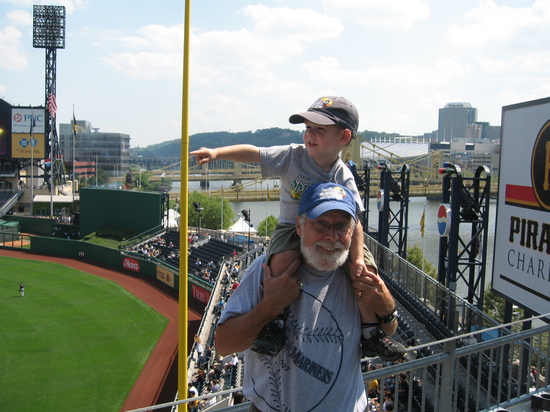 Here is a panaramic view from the RF corner upper deck seats:

Finally, it was game time.  We headed to our seats where this was our view of PNC Park from section 139, Row D: 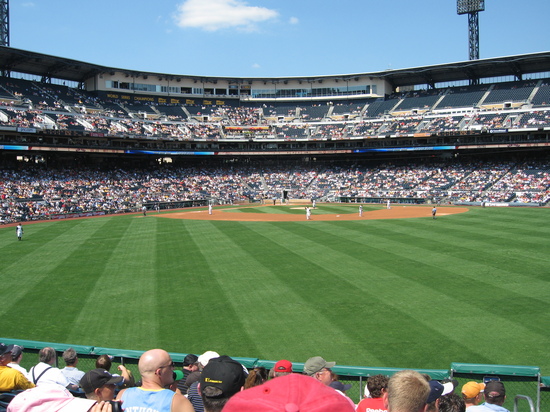 The Mets sent John Maine to the hill to face off against Paul Maholm.  The Mets were in first place in the N.L. East and were gearing up for another late season collapse.  The Pirates were standing in 5th place, a game up on the Reds and 20.5 back of the Cubs.

Argenis Reyes led the game off with a single and scored the Mets first run with two down in the first inning on a sacrifice fly by Carlos Beltran.

The Mets scored again in the fourth inning when David Wright singled, Carlos Beltran doubled and Carlos Delgado hit Wright in with a weak grounder to first base.

All the while, John Maine was stifling the Pirates pitching 1-hit ball.  Ultimately, Maine pitched five innings and gave up only 2 hits.  I’m not sure why he didn’t come back in the sixth.

But I’m getting ahead of myself.  Lets see some sights along the way.  Look who was standing in front of us in CF…

…2008 NL All-Star and Gold Glove center fielder, Nate McLouth.  He did nothing at the plate during this game.

Around the fourth inning, we decided it was high time we got some ice cream in us.  In a surprise move, Tim selected mint chocolate chip instead of his standard chocolate order.

On the way back to our seats, the Pirates Parrot (he probably has a name, but I don’t know it), was standing in the concourse right behind our seats.  I asked if we could get our picture with the Parrot: 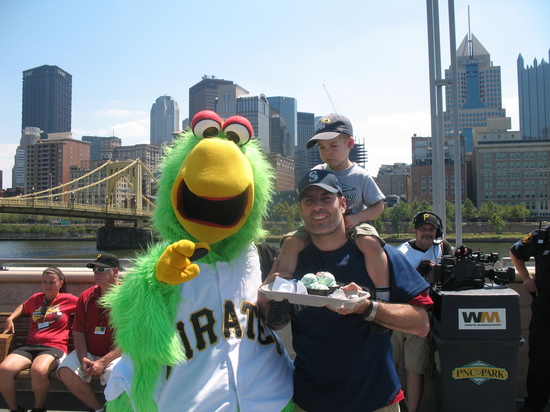 For some reason, Tim wanted no part of that happy Parrot.  Maybe he just wanted to get back to the seats for his ice cream.  Actually, Tim generally loves mascots.  But he is often intimidated and quiet once he finally gets up close next to a mascot.  I guess they are big strange characters for the little guy.

Hey, see that camera man behind the me, Tim and the Parrot?  He took note of us as we posed with the Parrot.  A couple minutes later, he was all-up-in-our-faces:

And this was the result…

…and so was this… 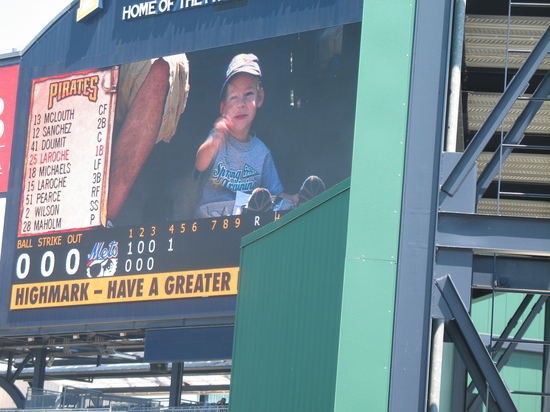 …Tim got a good 20 seconds of screen time!  He smiled and waved for the camera.  Ah, good times.

After the ice cream, we made a change.  We moved to the covered handicap-accessible / standing room walk way below the RF bleachers:

The Mets made a move too.  They replaced John Maine with Brian Stokes in the sixth inning.  It only took Stokes two batters and eight pitches to blow the save.  When Adam LaRoche’s 2-run bomb sailed over the OF fence, John Maine’s solid outing was wiped out.

In the top of the eighth, it was still tied 2-2 when the Pirates brought in Tyle Yates (the same Tyler Yates who autographed our baseball before the game).  Yates retired the first two batters, before giving up a single and two walks to load the bases.  The Pirates brought in Sean Burnett (yep, the same one who also signed our baseball before the game) to record the third out.  With a 1-1 count, Burnett induced an infield pop-up behind 3B by Carlos Delgado.  The Pirates escaped the bases loaded jam unscathed.

Then they came to the plate and did some work.  With three singles and a double, the Pirates scored three runs in the bottom of the eighth.  The final blow came on a 2-run double by future-Mariner Jack Wilson.

And so it became do or die time for the Mets…

…the Pirates were ready to record an ellusive “W.”

…Tatis popped out to 1B.  Two of the next four batters would reach base, but the other two…wouldn’t.  Coming full cirlce, after leading off the game with a single, Argenis Reyes closed out the game with a ground-out to short stop.

As the Pirates celebrated behind us, I snapped one final picture of Tim and my dad before we headed out…

…it was time to drive back to our house for the night before heading to Philadelphia for the final game of The Inaugural Great Cook Grandfather-Father-Son Baseball Roadtrip.