Friday night was our first Mariners game of the season!  Tim and I, joined by my parents, got all fancied up in our M’s gear and headed down to Safeco Field.  It was actually our second time to Safeco Field that day.  Earlier in the day, we toured Safeco Field — and it was a blast…I’ll write about it later.  Anyway, I’ve really only ever sat in two places at Safeco Field — my parents’ seats about 30 rows up from the 3B dugout (visitors) or my buddy Paul’s seats about 5 rows up from the Mariners dugout.  So I was excited for this trip because we planned to get seats all around Safeco Field.  This night, we had second row seats in the left field bleachers (Section 184, Row 2, Seats 5-8).  Here was our view: 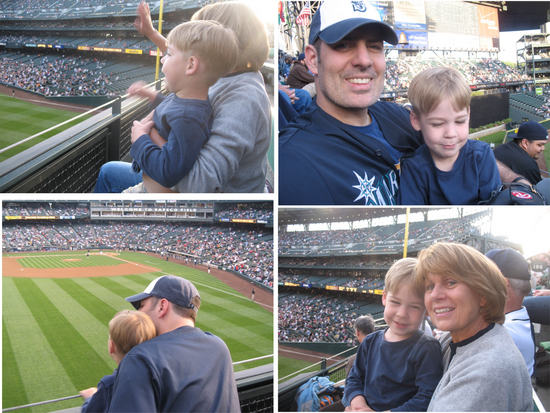 And here is a panoramic view from one section over toward CF:

They really are awesome seats.  And at $15/ticket, they are a great deal.  Here is the view looking over the railing, which I must admit was a bit scary with an active three year old.

Last season, Tim only attended two Mariners games – one in Baltimore that J.J. Putz blew the win in the 9th after Felix Hernandez pitched 8 scoreless innings and one in Seattle where the Indians just beat up on the M’s.  Additionally, Tim has only seen the M’s win once in Seattle.  It was his first game ever on 9/12/06.  So we were looking for the M’s to get Tim back into the win column in a big way tonight.

In the top of the picture, Carlos Silva is warming up to start the game.  To put it mildly, Silva has been a huge dissapointment so far.  In his last start, he won his first game since June 2008.  In between those wins, he had about 14-17 losses…not good.  However, we remained hopeful that he would start a winning streak by notching his second win of the season against the A’s.  Our optimism proved unwarranted, Silva gave up 6 runs in the third inning.  So, we were happy when he earned a no decision.

This was Tim’s first time seeing the A’s.  After we see the Rangers in a couple days, he will have seen the entire AL West.  It will be the first complete division he has seen live.  I’m quite happy about that since, after all, it is the most important division in MLB.  By August 17, 2009, Tim will complete all six divisions in MLB.

Anyway, below Silva is A’s starter Dana Eveland.  Eveland also would leave the game with a no decision after giving up 7 runs in 4.2 innings.

Anyway, back to the pictures.  The left field bleachers are a good spot to get some interesting shots.

Here is a really cool shot looking up at the clock: 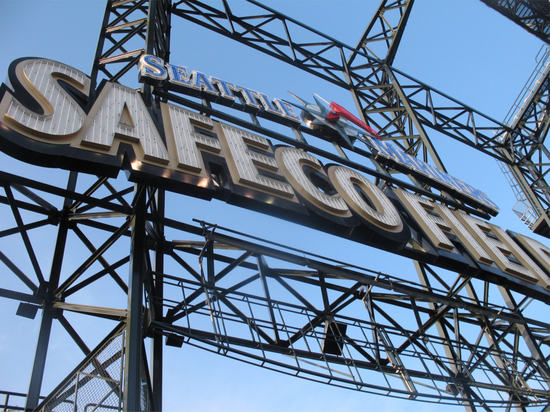 Here is the “concourse” under the left field bleachers: 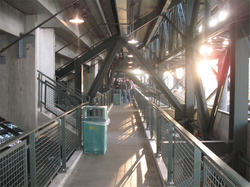 Here are some shots of the “umbrella” (as you’ll see in my forthcoming entry about the May 2nd game, Safeco Field is an open air stadium even when the “roof” is “closed” so it is more properly called an umbrella): 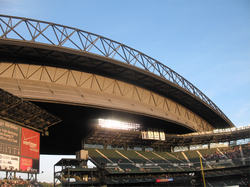 Here are the glorious AL West standings flags showing the the M’s are in first place:

As you can see, it was a beautiful Friday night in Seattle.  Here is an interesting picture from pre-game in the bullpen.  I don’t know if the bullpen guys are praying or hyping themselves up or what…but its interesting…particularly because you can see a pink back pack on the ground behind the huddle.  For those who don’t know, the M’s have a tradition of making their rookies carry stuff around in pink back packs.  I’m not sure whose backpack is shown here.

Whatever they were doing, you gotta hand it to these guys.  They came through be in this game (as did the Mariners bats) and saved Carlos Silva’s bacon…oh, wait…I’m not sure if the new slimmed-down Carlos can eat bacon any more.  We’ll say the bullpen saved Silva’s outmeal instead.

Anyway, here is another cool picture you can only get from the left field bleachers.  It is a look into the hand-run scoreboard where you can see the scoreboard operator catching a glimpse of the game: 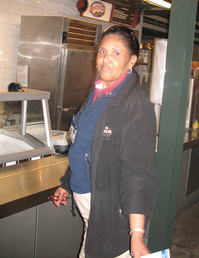 Next, it was time for me to go on the move.  Grandma was keeping Tim entertained in the seats, but he was ready for an ice cream helmet.  So I headed to the Ben & Jerry’s shop at the bottom of the stairs at the left field entrance.  Much to my surprise, I discovered B&J’s is gone and the space is empty.  So I headed to the fan assistance office behind home plate.  There, I told my story to the extremely nice and helpful people at the fan assistance office.  Some of them were unaware that B&J’s was gone.  So, one of them decided to walk with me to find ice cream helmets.  She declared as any good fan assistance person would, “I’ll come with you.  I need to know where you can get the helmets.”   Here was my guide.   I was upset I didn’t get her name because I would have emailed the M’s with my compliments and told them to give her a bonus.  We found the helmets tucked away in a corner by the Mariners Hall of Fame.  As I was buying Tim’s helmet (chocolate chip cookie dough…real ice cream, not soft serve!), I over heard my guide telling other M’s employees how Tim and I get an ice cream helmet at every stadium we visit.  I turned around an reiterated, “Except Baltimore!  The Orioles don’t have them.  Feel free to call them and tell them at the Mariners suggest that they get ice cream helmets!”  I think they are going to take my suggestion under advisement.

Anyway, so I got the ice cream and walked through the Mariners Hall of Fame on my way back to the seats.  I’ll have more on the M’s Hall of Fame in a later entry, I have some ideas of some people who belong in the Hall (for a hint:  watch the MLB network). As I strolled through the M’s Hall of Fame, a random M’s employee walks up to me and taps me on the shoulder and says, “Be sure to bring your son over here to get a picture picking off a home run!  Lots of fun!”  Apparently, this guy had heard of my ice cream helmet quest because Tim was still in the seats with Gma and Gpa and I wasn’t wearing a sign or anything proclaiming that I had a son at the game.  I thought it was a thoughtful suggestion.  Good going again Mariners employees!

One more word on the M’s HOF, its a nice little display area.  However, it is in its infancy.  The only members are Alvin Davis, Edgar Martinez, Jay Buhner and Dave Neishaus.  Eventually, Ken Griffey, Jr., Jamie Moyer, Randy Johnson and Ichiro will certainly all be members (I hope A-Rod is never inducted, the people of Seattle would BOO him like crazy at the induction ceremony).  We visited the Reds HOF and the Indians HOF last years.  The Reds HOF is the Gold Standard of team HOFs…I’m going out on a limb saying that because I haven’t visited all 30 teams.  It is really an amazing display of the team’s history.  I highly recommend it.

Anyway, I made it back to the seats where Tim and my folks were having a good time.  But Tim had an even better time once his ice cream helmet arrived:

After ice cream, we started walking around a bit to find some new perspectives on the game.  We headed out to CF where Tim threw some coins into the little-batting-boy fountain and we got this nice picture:

Then we ran into the Moose! 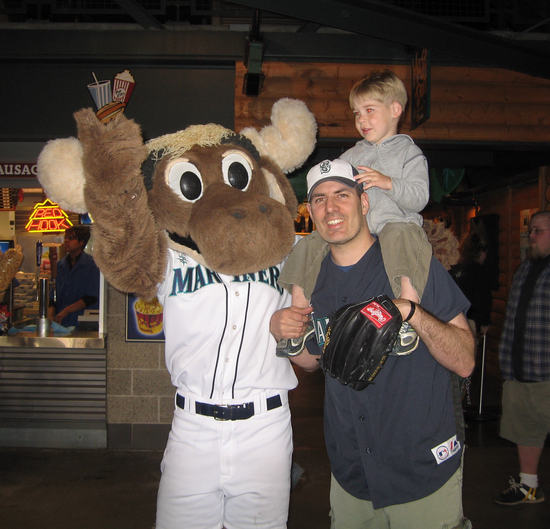 We then landed in the RF corner (Section 110) where this was our view:

My folks stayed in Section 110 for the rest of the game.  But Tim and I headed over to section 124 to try to find my buddy Paul (and our friend Mark Dewar).  Here is a view from the concourse as we scanned the crowd for Paul and Mark:

We ended upon going down the wrong aisle (should have gone down 123) to find Paul.  But we found these excellent open seats:

We stood up between innings and watched the players in the M’s dugout.  The biggest disappointment of the day was that Griff did not play.  But we got this picture of him hanging out in the dugout…and I combined it with this picture of Ichiro walking back into the dugout:

Every time Griff would look over, Tim and I would wave at him.  But he never waved back.  I told Tim to yell “Hi, Griffey” when we waved.  And it was hilarious, Griff would look our way and Tim would whisper so I could hardly hear him *hi, griffey*.  Then he looked at me and asked, “Baseball players don’t know how to wave?”  I told him there are so many people its hard for them to see each little boy to wave at them.  But some day, we’ll get Griff to wave it him!

While we were standing behind the dugout, I saw Jarrod Washburn standing in the dugout (just to the left o Ichiro above).  He was wearing a big Mariners jacket and I could see him spinning a ball around in the palm of his hand.  Tim was on my shoulders.  I made eye contact with Washburn and flashed him my glove as I yelled, “Hey, Jarrod how about that ball in your pocket?”  He looked up at me like he really wanted to give it to Tim but for some reason just couldn’t do it.  He said something to me, but I couldn’t understand him.  But it was essentially, something like, “sorry, I can’t.”  I said, “Ah, come on, Jarrod.  You can do it.  Its for a little boy!”  He said sorry again.  I turned around and sat down and a whole bunch of people looked at me and they all looked disappointed.  One of them asked me what happened.  I jokingly said, “Everyone should Boo Jarrod for denying this little boy a baseball!”  No one booed, but there was sort a collectivey, “Ahhhhhhhhhhh” that came from the section.  I turned around to sit down and the “Ahhhhhhhhhh” had broken Jarrod’s otherwise iron-will.  The ball came sailing up to me and I gloved it.  I yelled “Thank you” to Washburn.  And we sat down and I gave Tim the ball.  He immediately tried to throw it back to Washburn.  I think he thought we were playing catch.  I started to take a camera phone picture of us with the ball to send to my wife back home and a lady in front of me offered to take it.  Here is the picture.  Its pretty hilarious because Tim is starting to cry because he couldn’t throw the ball back to Jarrod (also, we had just flown from Pennsylvania the night before and it was essentially 2:00 a.m. for me and Tim at the time….which is well passed his bed time.  Anyway, the picture:

Anyway, the ball was mighty happy to be coming home with us.  And he’s a big Mariners fan so he’ll fit in just great at our house.  Here he is giving us a big Mariners smile:

After catching the ball, we headed back to Section 110 and watched the rest of the game with my folks.  The game was great.  It was a tie game in the bottom of the ninth.  The M’s loaded up the bases and one of my favorite young M’s, Jose Lopez, strode to the plate.  He had an epic 15-pitch at bat.  After the count went to 2-2, the pitcher didn’t throw another ball.  Lopez fouled off 10 pitches in a row.  Here he is in a blurry far-away picture:

On the 15th pitch, Lopez ended the game with a sharp line drive to left center.  MARINERS WIN!!! 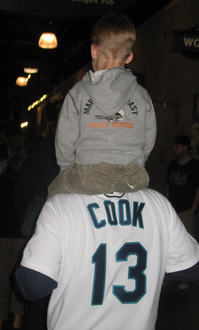